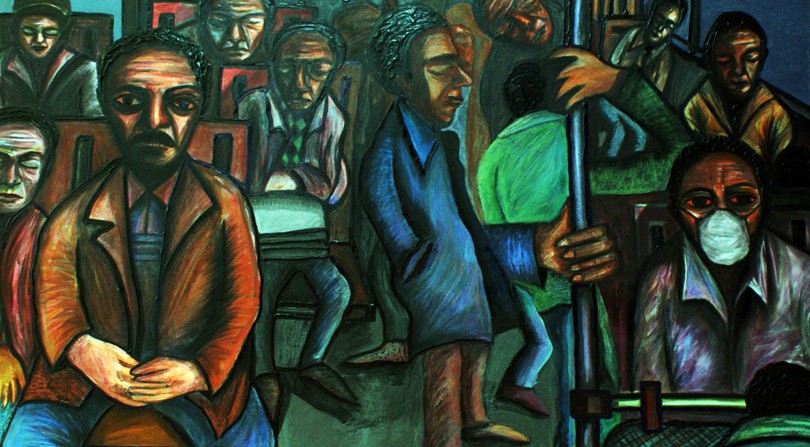 Hani Najm has started painting by self-studying and followed his path due to the oppositions she faced from his friends and classmates about his style because of believing in his art which has caused him to win numerous awards including the winner of Persian Youth National Drawing contest. Hani believes that painting is a natural procedure which has been created to answer human’s concerns and needs.

Hani’s famous portraits on metro tickets picture human’s consumerism and distracting the environment which will eventually harm his own kind. This precious collection of his artworks has been nominated in Magic of Persia Art Festival. This artist believes that embedded philosophical strategies and social researches of his artworks have made them popular. She says: “it is interesting that my painting is a tool for chronology or ethnography or other feature which are related to these subjects.” Since when have you started your professional painting career?
I’ve loved painting since my childhood and painted on every wall of our house. Before attending art collage and university, I didn’t take any painting classes. I used to paint with my own style. I have to say that painting was an inner willingness or demand for me that was with me ever since my childhood. Since 17, I decided to pay attention to this demand and develop it by following it professionally. My family was disagreed with my chosen path. I followed my style in university, which was also followed by the disagreement of my professors and classmates. In 2009, I became the winner of the National Persian Youth Festival that was held with presence of 3000 artists. I think when you are facing everyone’s objection; it means that you are following a right path. I don’t believe in academic studies because painting is a natural presider for satisfying man’s needs and troubles. What’s your technique in picturing still life?
My still life artworks belong to 2007. I have been told afterwards that they are like Valerio Adamy’s artworks while I haven’t seen his artworks at all. In my still life collection my artworks have been simplified; it is just the matter of lines and colored areas. I wanted to mix Pitt Mondrian and George Morandi in this collection, but I ended up in something completely different. I must say that I have been working on still life for a long time and I could have unified my attitudes in this collection. My artworks were filled with lines and it took me some time to come to this simplicity. This collection is the pursuit of light and refraction and I have changed the colors therefore you can find mutual colors in every piece. I have always loved the combination of black and red together. I do use warm colors in all my works. Tell us about your artworks on metro tickets from idea to performance …
Apart from my artworks on life routines, social issues and people’s fatigue I have considered they way people have dissolved into bus or metro atmosphere. I have decided to create art on recyclable and waste materials including tea bags, CDs or cheese cans. I always have my drawing notebook with me and draw on bus or metro. Once my notebook was full and I had no papers with me to draw on; I found some waste tickets on metro gates. I collected the tickets and drew metro passengers on them. I drew faced in a triangular shape in order to picture the lack of balance better as well as picturing the possibility of their fall. Triangle’s tip is facing the ground, and I drew reverse faces for a time.

I believe every object can convey a meaning all by itself, for example metro tickets are being collected to end up in rubbish while they can have their own destiny while holding someone’s picture on them. They can make a disposable ticket to look like a human.

Second sense of these artworks is preserving the environment. We use the tickets that are made with trees and transform them into garbage and a falling figure. Mankind destroys itself by destroying the nature. An artist’s duty is to picture the invisible truths. People are somehow destroying their environment through their usage of metro tickets while they are not aware of it. In the end, all colorful tickets are put next together and create a four meter artwork. How much have you been influenced by world well known painters such as Van Gog or Picasso?
Once an artist finds his own style, his artworks wouldn’t change a lot by inspiring form others. I almost have never been inspired. Every artist has his own concerns; for me, there have been plenty social sources for my inspiration that I didn’t feel the need for inspiring from other artists. I believe every artist will find his own way eventually, and he is chosen for following this path. I adore children’s painting and it’s purity. I prefer to be inspired by children’s painting, if I am willing to do so. Portraits play an important role in your art. Why is that?
I have painted thousands of portraits and have discussions with my models while picturing them with the aim of getting closet to their inner feelings and picturing them as they really are. My previous book is a portrait collection of well-known characters from Quajar dynasty to contemporary area; which includes writers, poets and musicians. These figures, which have been forgotten, have a flabbergasted look to the viewer.

I have painted another portrait collection with spatula. These pictures come out of my mind. I believe an artist can find himself while he is free; therefore he shouldn’t stop his mind. When a child touches everything, he is experiencing them. Stopping him from these experiments would stop his creativity. An artist shouldn’t betray himself or his art by sticking to a specific style for the sake of people’s approval. A human’s character is always changing, and so should his art be. Even changing the material can end up in changing the style.

Another collection of my portraits consists of those who are wearing masks because of polluted weather. I was inspired by Tehran’s highly polluted days and. I myself couldn’t withstand the weather, so I had to travel to the north in order to have some fresh air.

While drawing portraits from models, I found out that the similarity of portrait to model’s face was the priority for them’ while I’m trying to recreate the forms in my artworks. There is difference between a picture and a painting. An artist has his own feelings to convey in his artwork.

Painting is absolutely easy. I don’t even believe in the need for a teacher because the life would teach us and have the most efficient influences on us. Enjoying form what you do and conveying it to the viewer is the most important thing in painting. What was your audiences’ perspective of your art? Could you reach your ideals?
Normally, there is no accurate statistic about audiences’ attitudes; but my exhibitions could have the intended affect on the audience. In the Iran’s second National Conference of Visual Arts’ Association, which was held in Humanities and Cultural Studies Institute in 2013 with sociological approach, some special audiences wrote articles on some of my artworks. Also there will be an international Congress of Behavioral Science in Shahid Beheshti University in near future, in which an ISI article about my artworks will be published. An artwork of mine on metro tickets was chosen among the eight finalists of Magic of Persia Art Festival and it will be displayed on London’s Frays Art Gallery and Royal Collage of Art simultaneously during this October. What is it about your artworks that attract the audience?
According to these articles, psychological guidelines and hidden social studies are the strong points of my art. It is interesting that I took advantage of my art as a mean for picturing chronology and ethnography. More About Hani Najm at: Linkedin